Plotters planned to overthrow government by using us, says Bartholomew 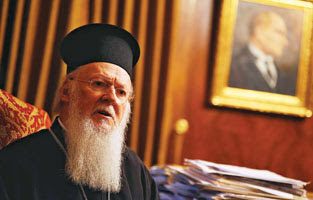 Based in İstanbul, the spiritual leader of the world's approximately 300 million Orthodox Christians, Bartholomew was referring to the latest revelations of a devious plan, called the Cage Operation Action Plan, by a group of members of the Naval Forces Command aimed at intimidating the country's non-Muslim population by assassinating some of their prominent figures and in this way undermine the power of the ruling party.
Recent incidents in İstanbul's Kurtuluş neighborhood and Adalar district suggest that the alleged plan had already been put into operation. Speaking on Tuesday, the Orthodox religious leader recalled that a meeting of the Association of the Zoğrafyon High School Alumni was raided about four years ago.
“When the Cage Plan was revealed, we thought that the raid could be part of that plan,” he said. “At the time we thought that they were just trying to scare us.” The patriarch said nobody was detained in relation to that incident. Patriarch Bartholomew is grateful to the security forces which uncovered the “dark plans.” “It is a very satisfactory development that the Turkish police and the prosecutors have been revealing those dark plans so the responsible people are captured and tried.”

The patriarch is hopeful that the troubles of the Greek minority and other minorities in Turkey will soon be resolved. And for that he trusts the government’s democratic initiative, which aims to grant more rights to citizens, even though it was mostly associated with the Kurdish initiative since it was one of the first steps. “We are very positive about the initiatives of our government. It is imperative all over the world that minorities should be treated with goodwill.”

In addition, the patriarch said all the initiatives involving Kurdish and Alevi citizens and efforts to establish diplomatic relations with Armenia will help Turkey’s European Union accession process. “It gives us a lot of hope that Turkey is moving toward the West and the European Union with the initiatives.
Those moves make us fell better while we are living in Turkey. God willing, the rest of our problems will be solved and we will be treated as equal citizens.”
Bartholomew hopes that the main school of theology of the Eastern Orthodox Church, the Halkı seminary, closed in 1971, will be reopened.
The seminary was closed under a law that put religious training under state control. EU officials and the United States have repeatedly called on Turkey to open the seminary, which has trained generations of Orthodox leaders, including Bartholomew.After its closure, the patriarchate tried to train future leaders of the church by sending them to schools of theology abroad.

‘Sevgi Erenerol injured us a lot’

Patriarch Bartholomew said they would like to use legal avenues in order to get three Greek churches given to the self-declared “Turkish Orthodox Patriarchate” run by the Erenerol family back. As part of the investigation into Ergenekon, several people with links to Turkey’s “deep state” were arrested and among them was Sevgi Erenerol, the “media and public relations officer of the independent patriarchate.” She is the granddaughter of Father Eftim, founder of the so-called “Turkish Orthodox Patriarchate.”
“Sevgi Erenerol hurt us a lot. She was talking against us. It has been revealed that they had meetings in those churches against us, the state and the [Justice and Development Party] AK Party. It’s a pity that a place of worship was used for such purposes,” the patriarch said.
Father Eftim was a village priest from the Turkish-speaking Karamanlı Greek community of Cappadocia in Anatolia who supported the Turks during the War of Independence. He then became the leader of the “patriarchate” in Kayseri in 1922 under the name of the “Independent Patriarchate of the Turkish Orthodox.”

Eftim and his family were exempted from the population exchange between Greece and Turkey, but his small congregation moved out of the country. Without any congregation, Eftim moved to İstanbul in 1924, together with the “patriarchate.” Eftim had some followers in Galata, an area with a large Greek population. Eftim’s son Turgut succeeded his father and called himself Patriarch Eftim II. Then came Turgut’s brother, and then they brought Paşa [Sevgi Erenerol’s brother] from the US to assume the role of the “patriarch.” They have all been excommunicated by the Orthodox Church.
Eftim and his sons call themselves “patriarchs.” Patriarch Bartholomew said nobody elected them.“Father Eftim was married, so it was not possible for him to be a patriarch or bishop. He acted against the Patriarchate. He was excommunicated but he declared himself ‘patriarch.’ Nobody recognizes the ‘Turkish Orthodox Patriarchate.’ They don’t even have followers. But they received state support. Eftim and his men came to the Patriarchate and raided it in the 1920s. After his demise his son took over. Indeed, patriarchs are elected and it is not a position to be passed from father to son. In the end, their relations with Ergenekon have been revealed.”
In the pages 971-980 of the Ergenekon indictment, there are explanations about the actions of Sevgi Erenerol and “Turkish Orthodox Patriarchate.” 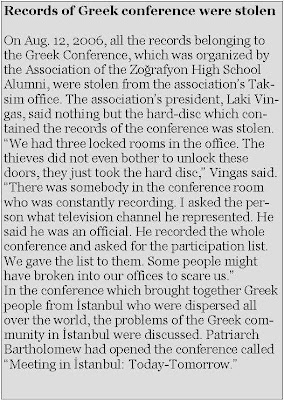 On Oct. 28, 2005, some platforms such as the Nationalist Businesspeople Association, the Noel Baba Foundation and the Turkish Orthodox Patriarchate held a protest in front of the Greek Orthodox Patriarchate and shouted, “The patriarchate should go to Greece.” Ergenekon suspect Kemal Kerinçsiz and Noel Baba Foundation President Muammer Karabulut delivered speeches at the protest, which were attended by also Sevgi Erenerol and Zeki Yurdakul Çağman. They left a black wreath at the gates of the Patriarchate.
‘We are citizens of Turkey’
Patriarch Bartholomew, whose initiatives include advancing religious tolerance among the world’s religions have been widely noted, although received with suspicion by some in Turkey, said the number of the Greek-Turkish citizens living in Turkey is decreasing every day.
“Democratic initiatives will prevent the rest from leaving,” the patriarch said.
“It is sad to hear that our foundations have been referred as ‘foreign.’ We are Christians but we are born here and we were raised here. I was born in Gökçeada. I love my country and village. I did my military service for two years. I pay my taxes. Our only difference is our religion. But we are equal citizens under the Constitution.”